That people have lived in the area since ancient times is evidenced by the ninety Bronze Age barrows which can be found in the parish.

The lodge, after which the parish is named, is situated near the centre of the parish, and was originally the Groom Keeper's Lodge belonging to the Crown estate, and which later became a Head Forester's residence.

Also found near the centre of the parish is a dyked enclosure known as Bishops Dyke, or The Bishop of Winchester's Purlieu.

The earthwork comprises a bank, around 1 metre high and 4 metres wide, between ditches. The precise purpose of the enclosure is not known - it may have been used as a park for grazing, but the current quality of the grazing is poor.

The local legend states that King John and the Bishop of Winchester were once riding together in the New Forest when the king laughingly told the bishop that he might have "as much land as he could crawl round." The bishop, who was rather fat, had a contraption made to help support him, and so managed to "crawl" round a large area.

This became the Bishop's Purlieu.

Within the parish there are sites of two medieval hunting lodges, both called Church Place. The first site, close to the B3056 road to Lyndhurst, is indicated by earthwork banks and an external ditch enclosing a raised platform. The second site is in Churchplace Inclosure near Ashurst on a sandy knoll, and is a square earthwork comprising a broad bank with an outer ditch. 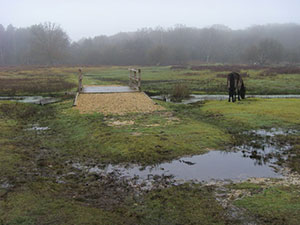 Also near Ashurst are the earthwork remains of a 16th-century saltpetre house. It was probably in use for the manufacture of saltpetre when monopolies for its manufacture in England were granted to Germans. It now consists of banks and hollows of various sizes enclosed in a rectangular area about 100 metres by 50 metres.

In 1847 the Southampton and Dorchester Railway was built through the New Forest, and Beaulieu Road railway station was opened in what is now the middle of the parish. The village of Beaulieu is some 3.5 miles (5.5 km) to the south of the station, and as a result, the station remains very rural.

The civil parish of Denny Lodge was created in 1868 from extra-parochial parts of the New Forest. It was enlarged in 1934 with the addition of 862 acres from Brockenhurst parish, and 4722 acres from Colbury parish which was abolished in that year.

The Township of Denny Lodge by R. Jackman

The largest being in the West Riding of Yorkshire. Yet this parish has no church and no school for the children of its 600 inhabitants. It has no public hall, but it can boast to four public houses.

In a private room of one of these; the Royal Oak, Hilltop; has been held every meeting of the local inhabitants for conducting the civil business relating to the Poor Law; and this continued with the meetings of the parish council.

The township of Denny Lodge, as it was known, extends to Copythorne in the north to Exbury in the south. Its boundaries touch 12 other parishes in the New Forest. Most of its area is covered by forest heathland, bog and woodland.

The story of Denny Lodge starts on 16 March 1868 when it was formed by the order of the Poor Law board and subsequently it was added to the New Forest Union by an order dated 6th April 1868. Someone had to collect these rates and this was the job of the Assistant Overseer.

In 1869 this post was held by Mr James Caton for a salary of £9.10 s (shillings) per annum a rate of 11d in the pound was levied for collecting enough to pay the quarterly demand of £38.00.  The actual amount of the rate varied from quarter to quarter depending upon how much was in the "parish account".

The administration of the affairs of the parish was conducted by a committee with Mr Thomas Payne, Chairman; Mr Aaron Perkess, Mr James Kidgell and Mr John Wallace, Guardians of the Poor; Mr George Frimmer and Mr George Knapp, Overseers. In 1871 the parish appointed a Parish Constable and in 1887 a Waywarden to look after the roads in the parish.

At the close of 1894 the Parish Council took over the duties of this committee. The first parish meeting was held in a private room of the Royal Oakwith the Hon. John Scott-Montague residing. Five men were elected, Messrs William Lawton; William E.M Littledale; Maj Henry A.C Talbot; Percy Cecil Thurburn and George Reed.

At the first business meeting of the Council on 13 December 1894, Major Talbot was elected Chairman; Mr Littledale Vice-Chairman; Mr Lawton and Mr William Burnett, Overseers of the Poor. Mr R.S Hankinson was appointed Treasurer for which post he had to provide a bond by two sureties in the sum of 1% of the rateable value of the parish which at that time was for £4,198.

The high amount of the rate was due to the presence of the London and South Western Railway with its station at Beaulieu Road. Miss F Caton, daughter of the previous Assistant Overseer, was appointed Clerk and Assistant Overseer for a salary of £20 per annum.

The expenses for the parish were large. For the half year ending 29th September 1895 the estimated expenses were:

Rates of one half in the pound was approved as  this brought in £244.18 s. 8d. The £6 for school attendance was the council's contribution to the school (for there was one Longdown then) As the teachers were paid according to the attendances, and the parents were expected to contribute too.

It was the duty of the council to propose the rate which it thought appropriate and the Assistant Overseer to go round the parish to collect the money this practice of door-to-door collection of rates existed right up until 1942.

Many of the duties and financial liabilities of the council were taken over by the District Council (later the New Forest Rural District Council) and instead of being responsible for some £500 a year, the total commitment of the Denny Lodge Parish Council fell to between £10 and £15 per annum and this included the Clerk's salary.

As Local Government became centralised on Lyndhurst (R D C) and Winchester (H C C), the work of the parish council altered. No longer could it decide on the job and get on with it. Now it was a matter of correspondence with another authority to get something done.

In 1896 there was trouble with the drainage at Hilltop. This trouble, patched up from time to time, persists throughout the minutes of the Council. In 1899 permission was given to repair a road by taking gravel from local gravel pits at a royalty of one penny per yard.

At the meeting on 14 October and 1903, the Parish Council discussed a letter from Mr Coxwell complaining of the speed of motor cars through the parish. A speed limit of 8 mph was proposed especially in the dangerous parts such as Ipers Bridge Hill. This bridge comes in for much comment mainly due to the increase in the volume and speed of the traffic.

In June 1934, the recurring problem of Public Rights of Way came up. This time it related to a footpath from Rollestone Lane to Warrens Hill. As so often happens, a new owner comes along and buys a piece of land and is not familiar with local customs and rights. Also, as so often happens, the matter was settled by consultation with the interested parties.

Owing to the alteration of Rural Parish Representation in 1934, it was possible to increase the number of Parish Councillors in Denny Lodge to 7 (as it is today). The next big change came in 1949 when they were elected by ballot instead of by show of hands at the Annual Parish Meeting. Mr Frederick Renyard nearly lost his seat then as he was late sending in his nomination form.

There was school at Longdown in 1935 at the time of the Silver Jubilee of King George V and the children were treated to a tea and a souvenir mug. All for the cost of £7.9s 9d. Two years later when a similar event was staged for the Coronation Celebrations the cost was only £6.11s

The cost of bringing electricity and piped water was discussed right back in 1935. The difficulty was the scattered nature of the parish and separate schemes had to be formulated for each part of it. During the war there was a Royal Engineers camp near Beaulieu Road Station and this assisted in the solving of one problem, though they are still without mains electricity.

The electricity was eventually given to the Hilltop area in 1954. Air raid shelters were placed in the parish and a three man Stirrup Pump Team organised. Was this to protect their debating chamber (the tearooms); or was it to protect the Royal Oak?!

In 1948 the Council took a wise step by joining the New Forest District Association of Parish Councils for the legal complexities which faced Councillors and the Clerk were and still are becoming more and more involved.

The problems which are discussed by the Parish Council have not differed a lot. Litter; Housing; Caravan Sites; Road Safety and the Preservation of the Rights of the Public on the Forest and Footpaths.

Who were, and are, the public spirited people who give up their spare time to attend meetings and enquiries of the Parish Council? It is not possible to mention all those who have served over the past 101 years. One name which crops up year after year from 1902 to 1934 is that of Mr John Musselwhite who for many years was either Chairman or Vice-Chairman.

Mr J.A Cass served for 26 years. Of the present Councillors, Mr H.H Tillyer was elected to the Council in 1935; Mr F Renyard in 1940 and Mr W Fry in 1953. But a name which keeps on cropping up is that of the Toomer family. Back in 1898 Mr William Toomer was elected to the Council but resigned in 1902 to become the Clerk when Miss Caton died; a post which he held until his own death in 1937.

His son, Percy, who was a Councillor in 1934, took over the Clerkship from his father, but returned to Council duties in 1946 and has regularly attended to Parish affairs except for a short period due to ill health. His wife, Winifred, also served as Clerk for a few years. There only seem to have been two ladies on the Council. Mrs Ada Brent who served for six years from 1949 and Mrs Patricia Strachan, who is still on the council.

So, for 101 years the township of Denny Lodge has being served by its public spirited citizens; often ignored by their electors as is shown by the poor attendance at the Annual Parish Meetings. These meetings are peculiar to Parish Councils. Here electors can ask questions of the "Parish Fathers". Here they can make resolutions even though the topic may not have been discussed by the Council.

We wish this township another 101 years of prosperity; of energetic citizens; and of protecting the rights and privileges of the local public.